Jump to: navigation, search
Past member
José Rufino is no longer with the Navigators. 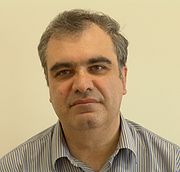 José Rufino is Assistant Professor at the Departmento de Informática, Faculdade de Ciências da Universidade de Lisboa (FCUL), and a senior researcher of LaSIGE, the Large-Scale Informatics Systems Laboratory, since 2003. He has lectured at Instituto Superior Técnico (IST), no Departamento de Engenharia Electrotécnica e de Computadores, from 1992 to 2003. From 1985 to 1996 he was a member of the Distributed Systems and Industrial Automation Group at Instituto de Engenharia de Sistemas e Computadores (INESC). From 1996 to 2003, he was a researcher at Centro de Sistemas Telemáticos e Computacionais (IST), in the areas of fault-tolerance and distributed embedded real-time systems. He participated and contributed to several national and international projects such as, Delta-4, DINAS-DQS, Codicom, DEAR-COTS, HIDENETS and KARYON. He was the field responsible of Codicom. He was the Principal Investigator (PI) of national projects DARIO and READAPT, funded by FCT, and of the international projects AIR and AIR-II, sponsored by the European Space Agency (ESA). He was responsible for the European transnational cooperation projects SAPIENT and PROPHECY. Currently, he is a member of the Management Committee of COST Action IC1402 - Runtime Verification beyond Monitoring (ARVI). His current research interests include fault-tolerant and real-time distributed systems, wired and wireless sensor/actuator and fieldbus networks, controller area networks (CAN and CAN FD), real-time operating system kernels, embedded systems design, including time and space partitioning (TSP), and runtime verification. He has more than 80 publications in these areas. He is a member of the Ordem dos Engenheiros, ACM and IEEE.