Jump to: navigation, search
Past member
João Pedro Craveiro is no longer with the Navigators. 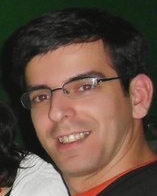 João Pedro Craveiro has a M.Sc. (2009) in Informatics Engineering from the University of Lisbon, Portugal, and is a Ph.D. candidate in Informatics at the same institution, performing his research work at LaSIGE (Large-Scale Informatics Systems Laboratory). His research is based around embedded and real-time systems, and he is currently focused on time- and space-partitioned (TSP) architectures, multiprocessor real-time scheduling, and (self-)adaptability. His current research is aligned with projects which obtained funding through competitive programmes, namely national project READAPT (funded by FCT) and international consortium project KARYON (funded by the European Commission - 7th Framework Programme). Previously, he has been involved in the international consortium projects AIR and AIR-II (sponsored by the European Space Agency). He is co-author of several refereed publications on these topics. He has also performed teaching duties at the Lisbon pole of the Carnegie-Mellon University-Portugal partnership and the Faculty of Sciences of the University of Lisbon (FCUL). He is a graduate student member of ACM, IEEE, IEEE CS and IEEE IES.